In Richmond, VA, we are lucky to have another fabulous public garden in town called Maymont.  This garden was the estate of the Dooley family from 1893 to 1925.  The 100-acre property boasts a fabulous tree collection, mansion, Children's Farm, wild animal collection, Italian garden, and a 100-year old Japanese Garden which is the largest of its kind in the USA.  It is walking distance from my house and has held a special place in my heart since the first time I visited during my very first trip to Richmond.  Here are a few photos from my visit last week. 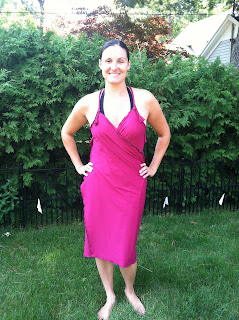 I saw an adorable bathing suit cover-up on Pinterest and had to give it a try.  I used the tutorial from  the La Vie en Rose blog.  I basically followed her directions, with a few changes.  For the record, this took more than the 20 minutes that she claims, but it was probably because of the extras I added.  I wanted the top to be more secure so I crossed the braided straps in the back.  This proved to be impossible to take on and off, so I put fabric-covered buttons on the front so I can unbutton the straps to take it off.  It still isn't the easiest thing to put on and takes a bit of maneuvering, but I think it will be ok.  I also used a pink lycra/spandex material instead of using jersey.  Instead of leaving the edges raw, I serged the edges with my Aunt Cindy's fancy serger.  I stretched the fabric as I serged to make a wavy lettuce edge.  I'm pretty happy with the way it turned out.  Now its time to hit the beach!