I love love love breakfast food!  Every Saturday, I take a long time to make myself a special breakfast (or sometimes brunch if I'm feeling lazy).  I like to try out new recipes and also take this time to master the basics.  I have to admit that I was always a little afraid of trying poached eggs.  Being intimidated by an egg sounds silly, but for some reason it seemed like an unattainable feat.  Well, this week I decided to bite the bullet and poach an egg.  Being a scientist at heart, I turned to a chef that always seems to know, chemically, why food cooks the way it does, Mr. Alton Brown.  After a science lesson from Alton I was ready to tackle the poached egg.  Alton suggested adding a teaspoon of vinegar for each cup of water in the pan.  Brilliant!  I never would have guessed that step in a million years... thanks AB!  Okay, I know this is too much enthusiasm about the poaching an egg, but the thing is that it worked and tasted really really good! 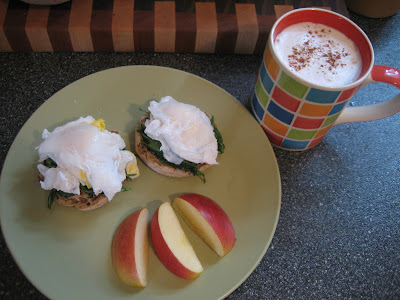 I put about 2 inches of water in a deep sided sauce pan, added 2 tsp of vinegar, then added one egg at a time to the boiling water (I cracked them individually into a bowl first).  Then I covered the pan, took it off of the heat and let it sit for 6 minutes.  I served the poached eggs on a toasted English muffin with sauteed arugula that I bought at the South of the James Market.  Yum!!

To accompany my newly mastered poached eggs I decided to adapt a recipe that I first tried for Thanksgiving.  Since the Food Network stars are a second family to me, I called on a recipe from Ms. Paula Deen for Baked Brie.  I just love Paula.  She adds butter to everything which makes it taste amazing and she is just so darn cute.  My mom recently introduced me to the mini-bries from Trader Joes, so looking at the sheet of puff pastry that I had left over from the Thanksgiving baked brie and thinking about my mini-bries, lightning bolts went off in my head and I decided to make mini-baked brie bites!  I feel like this is one of my crowing achievements as a home cook.
I started by defrosting one sheet of puff pastry and cutting it into six rectangles.  Then I browned about 1/4 cup of chopped pecans in butter.  Then I placed one mini-brie on each rectangle of puff pastry, topped it with about a teaspoon of nuts and a table spoon of blackberry jam.
I pulled the corners of the pastry up to make a little enclosed packet and brushed the outside with a beaten egg.  *In this part of the recipe I deviate from Paula's recipe.  She says to brush both sides of the pastry with egg before you fill it.  I found that the part that touches the cookie sheet will stick to the pan if it is brushed with egg, so I waited until the end to only brush the outside with egg and it didn't stick.  Take note Paula!

The pastry packets were cooked at 425 degrees F for 25 mins and I served them warm on water crackers.  They were divine!