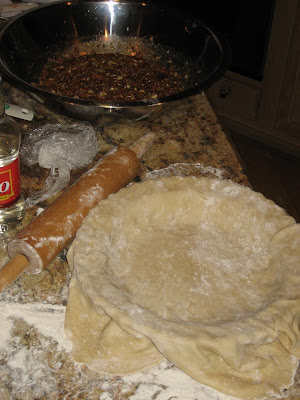 ﻿﻿Since it is Thanksgiving, I thought a post about pie would be appropriate.  I helped my friend Ali make a delicious Maple Pecan Pie for her family's Thanksgiving meal.  She found the recipe, which was originally published in Good Housekeeping, on the Delish web site's recipe finder.  This recipe appealed to me because it takes a traditional pecan pie, and adds maple syrup and dark rum- yum!  I won't reprint the whole recipe, so check out the site for the full version.  We doubled the recipe to make two pies, but the original recipe is listed below.

In making this pie, we found that the crust recipe was very time consuming.  There was so many chilling steps, that it just took forever.  You can refrigerate it for 24 hours, so if you do follow this crust recipe, I would do it the night before.

Email ThisBlogThis!Share to TwitterShare to FacebookShare to Pinterest
Labels: recipes