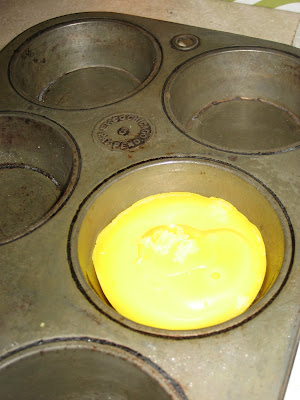 Each time we visit the hives, we do a little "housekeeping," scraping extra wax off of the frames.  I always save it with the intention of using it for beeswax lip balm. The wax that we have collected isn't pure- it also contains bee parts, dirt, and propolis ("bee cement"- a resinous mixture of mostly tree sap that the bees use to close up unwanted spaces, such as the cracks between the boxes), among other things.

Bees wax used for lip balm must be very pure.  This requires straining.  There are a number of different ways to strain impurities out of wax- a solar wax melter, a double boiler over a stove (it is important not to do this if you are using a gas stove- beeswax is very flammable), a double boiler using a crock pot, and a few other methods.  Although it is very easy to make a solar wax melter, I am impatient and I already had the materials for the crock pot method, so I went with that. 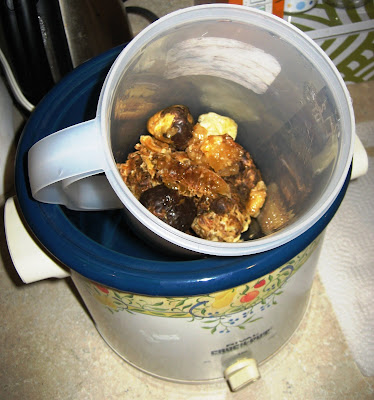 I first put the wax in a plastic pitcher that I found at the thrift store for $0.50.  Then I put it in my crock pot water bath (also a thift store purchase $6).  At this point, the pitcher kept floating to the top, so I topped it with a saucepan filled with rice to weigh it down. 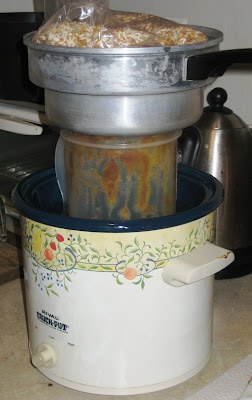 When the wax was melted, it looked like a black sludgy mess.

I set up a filter using a nylon knee-high (queen sized) stretched over another plastic pitcher filled with about 3 inches of water.  I poured the wax through the pantyhose and it did a pretty good job of letting the wax pass through while keeping the impurities on top.  The problem is that the impurities dry with some wax and make the filter usable for one time only.  Since I would have to do this a few times, I decided to switch to a paper towel filter because it would be cheaper and I can use the paper towels later as smoker fuel rather than throwing the pantyhose away.

I filtered it about 6 times and it finally was free of impurities.  I also switched to a pyrex measuring cup instead of the plastic pitcher, because the plastic was incredibly hard to clean.
I lost a little wax each time and I ended up with 24 grams of wax.  Since many of the lip balm recipes call for 3 ounces of wax, I will need to do a lot more collecting and straining before I'll be able to make any!

Email ThisBlogThis!Share to TwitterShare to FacebookShare to Pinterest
Labels: Beekeeping